Have you ever noticed this difference between Moree and Roma? 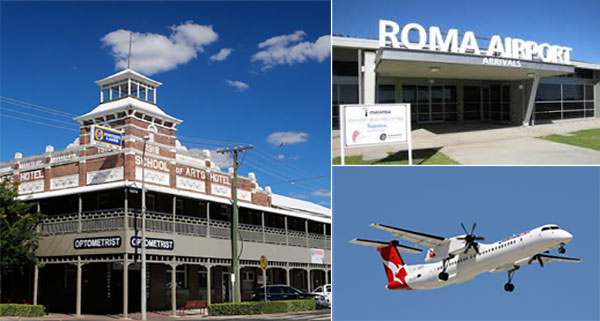 If you want to fly with Qantas from Sydney to Moree in northern NSW tomorrow there is one flight a day.

Yet if you want to fly from Brisbane to Roma there are 11 flights to choose from.

Moree has a population of almost 10,000 people and Roma almost 7000 people but the big difference between the two towns is natural gas development from coal seams.

The new Roma airport is Maranoa Council’s largest project to date. The $14 million upgrade was supported and funded by the Queensland Government, Australian Pacific LNG and Santos. It boasts a new terminal building, 274 car park spaces with security lighting and a stronger runway that can handle larger aircraft particularly in times of natural disaster.

About 140 kilometres to the east of Roma sits the even smaller town of Miles with a population of approximately 1000 people. It too has an airport.

The upgraded aerodrome is owned and managed by Western Downs Regional Council. The runway upgrade project, at a total cost of $20 million at completion, was managed by Origin Energy on behalf of Australia Pacific LNG. As part of the upgrade the runway has been extended, widened and strengthened, with lighting to support all weather and night/day operations, and a new surface designed to handle larger 70-seat aircraft.

While paving the way for larger aircraft it also reduces pressure on local roads.

« Taking the message directly to Canberra – Australian jobs and natural gas Obama declares Natural Gas a Game Changer for America – what’s stopping Australia doing the same? »
The following letter will be sent to people who seek to represent you in Federal Parliament. Dear [title] [surname],