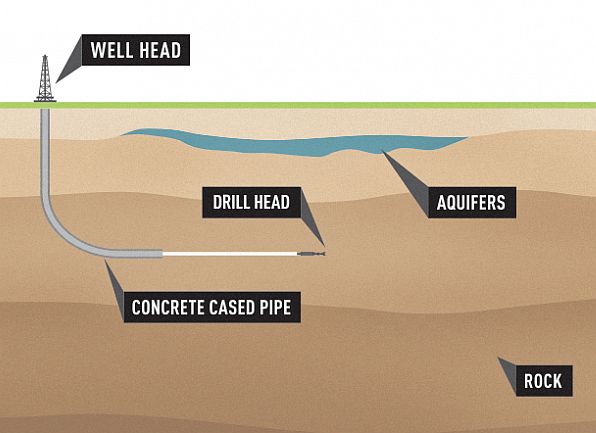 Horizontal drilling is a technique developed by the oil and gas industry to develop larger oil and gas resources from a single well.

Horizontal drilling and horizontal wells have been common practice in the oil and natural gas industries since the 1970s, but the US Department of Energy notes the concept was first introduced as early as 1929.

In Australia, horizontal or “directional” drilling has been common since the 1990s and has been used more recently to target deep shale gas resources in South Australia and NT.

Australia’s first horizontal shale gas well was drilled by Santos in SA’s Cooper Basin in 2013 and the most recent example was Origin’s Amungee NW-1H well in the Beetaloo Basin in the NT.

The Amungee well was drilled in 2015 and hydraulically fractured in 2016. It resulted in an important natural shale gas discovery for the Northern Territory.

These and other horizontal wells have been drilled safely with no impact on water resources or the environment.

Larger wells do use more water, sand and other additives, but horizontal drilling technology means fewer wells are drilled overall and the environmental impact is thus reduced.

Also called deviated drilling, directional drilling involves deliberately shifting a well’s path from the vertical. Wells can be deviated until they are running horizontally. They can even be steered – in real time – upwards or downwards once the horizontal direction is established.

Reasons for directional drilling include:

Directional drilling is precise. Wells kilometres deep can be directed to within centimetres of their targets.

This technology developed for the oil and gas industry is now also being used in other industry applications, including:

« Natural gas – essential for Australian manufacturing The road to renewables goes via Australia’s gas fields »
The following letter will be sent to people who seek to represent you in Federal Parliament. Dear [title] [surname],