Evidence from Queensland’s Surat Basin shows how the development of an onshore gas industry can enhance regional development.

A 2013 KPMG study shows that resources developments are not only making regions more prosperous, but also making their communities more stable and socially sustainable.

The study compiles key standard-of-living measures and basic demographic profiles of Australia’s nine main resources regions. It was undertaken for APPEA and the Minerals Council of Australia.

It is clear that resources developments are driving these regions’ economies. KPMG found that in the five years to 2011, the number of people employed in the resources sector across the sampled regions grew by 13,810 – or 50%. The number employed in all industries – including resources – grew by just 14%.

In that same period, the population of Australia’s resources regions had grown at 1.5% per year. This was the same as the national average but greater than the 0.8% for regional Australia more generally.

This shows that while some employees are flying in and flying out, others are relocating to the resources regions.

Queensland’s Surat Basin is the region with the most onshore gas industry activity. 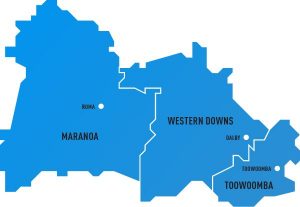 Despite the rise in population, the unemployment rate remained stable at about 4% – well below the Australian and Queensland averages.

The number of residents at the same address that they were living in five years previously increased by 3.3%. So despite an influx of new workers, there are strong indications that locals no longer have to leave the region to find work.

In addition, in the last five years the retail trade sector has overtaken healthcare and social assistance as the region’s largest industry of employment. This rebuts claims that money being made in the region is not being spent there.

These figures indicate that the resources sector – which in this case is mostly the gas industry – is making the Surat region more prosperous, stable and sustainable.

Onshore gas and regional development in the US

A study of the Eagle Ford shale project in South Texas by the University of Texas reported that in 2010 alone, the project added US$1.3 billion to the gross state product, supported 12,600 jobs and added US$2.9 billion in total economic output.

These jobs are not just gas-related. Many local businesses including restaurants, hotels, supermarkets and other commercial activities are booming.

It is too soon to predict the scale of shale gas development in Australia. But US shale operations and Queensland coal seam gas operations indicate that a successful Australian shale gas industry would employ several thousand people in construction, operations, infrastructure and service jobs.

Onshore gas production also generates state royalties – so many of the long-term benefits of new gas production would remain in the state where the gas is produced.